Well, I received two graphic novels for review on Monday last week and figured that would be it mail-wise, but on Friday I received a handful of packages bringing a few more review books and a book/dvd set I had ordered.

As Ando learns to use his powers effectively, he must decide whether or not to oppose Inukai. A decision made much harder when it could cost him his life.

The shocking tales continue in Volume 2 of "Hanako and the Terror of Allegory". What is lurking in the mirrors at midnight, and what horror is causing the killing spree of hundreds of suicidal girls? And as Aso delves into the mind of Kanae's blind cousin, he and Hanako discover the haunting allegory that entraps her. And what will Hanako and Kanae do when they see Aso lying lifeless in a pool of his own blood?

A flamboyant party host is murdered in full view of a roomful of bridge players! When the flamboyant socialite Mr Shaitana boasts to Poirot that murder is an art form rather than a serious science for the little grey cells, the detective has some reservations about accepting his invitation to a party. And his reticence proves to be well-judged when an after-dinner game of bridge turns into something decidedly nastier than mere art! Now words and pictures combine in an exciting new way of telling these stories -- full-colour graphic novels which enhance the original stories and offer a completely new way of enjoying some of the world's most popular and exciting mysteries.

An elderly spinster has been poisoned in her country home -- with only her little dog as the witness! Everyone blamed Emily's accident on a rubber ball left on the stairs by her frisky terrier. But the more she thought about her fall, the more convinced she became that one of her relatives was trying to kill her. On April 17th she wrote her suspicions in a letter to Hercule Poirot. Mysteriously he didn't receive the letter until June 28th! by which time Emily was already dead! Now words and pictures combine in an exciting new way of telling these stories -- full-colour graphic novels which enhance the original stories and offer a completely new way of enjoying some of the world's most popular and exciting mysteries.

Thirteen year old Dellie lives with the guilt that her little brother’s death was her fault. Her mother cries all the time and because she wants Dellie to stay safe, she keeps her inside as much as she can. It doesn’t matter that Dellie longs to go outside to be like other girls or that there’s a boy she likes and he likes her too. All that matters to her mother is that she’s safe at home. So, Dellie has no choice but to watch the world of her housing project through her second story window. Things start to change soon after new neighbors move in on the first floor. Trouble like this has never happened in Dellie’s building before. Now there are men fighting on the stoop, gunshots echoing through the night and Corey, a hungry and abused five year old boy knocking on her door looking for something to eat. Corey reminds Dellie of her brother and even though their friendship is dangerous, she wonders if this time, she’ll be able to do what needs to be done. Will she be able to save Corey?

Is Christianity a bland, domesticated religion, unthreatening and easy to grasp? Or is it the most exotic, unexpected, and uncanny of the religious paths? For the mystics and saints -- and for Father Robert Barron who discovered Christianity through them -- it is surely the strangest way. "At its very center," writes Fr. Barron, "is a God who comes after us with a reckless abandon, breaking open his own heart in love in order to include us in the rhythm of his own life."

In this book, Fr. Barron lays out three basic paths of the spiritual life: Finding the Center; Knowing You Are A Sinner; and Realizing Your Life is Not About You. He also provides practical approaches to enhance your journey along these three paths. 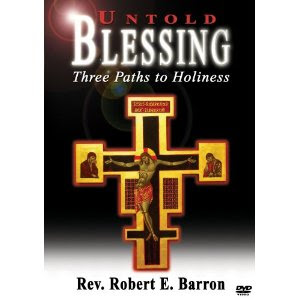 Our ultimate goal is to be a saint. It is our greatest calling and what is desired for us by our Creator. Father Robert Barron paints a beautiful and mysterious image of what it takes to be a follower of, “the One who is, Jesus Christ.” He lays out three intriguing paths to holiness: Finding the Center; Knowing You’re A Sinner; and Realizing Your Life is Not About You. He also provides practical approaches to enhance the journey along these three paths.

Untold Blessing DVD and its companion book, The Strangest Way, are insightful guides for meditation as you walk in the Way, either for personal reflection or for small group study and discussion.
Labels: books in the mail