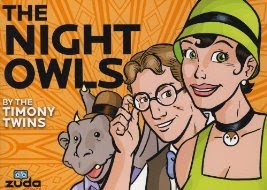 Acquired: Received a review copy from the publisher.

Reason for Reading: This is a Cybils '10 nominee and required reading for me as a graphic novels panelist.

The Night Owls is a humorous and unique take on the noir detective story of the late 1920's. Professor Ernest Baxter, who cannot go out in the daylight, and his assistant, flapper Mindy Markus run the detective agency, The Night Owls. Along with them is their sidekick the gargoyle, Roscoe. Working only during the night hours, except if Mindy must make a daytime outing, the agency deals with crooks of a supernatural nature such as Mr. You who has no face of his own and steals other people's faces to commit his crimes, werewolves who murder young women, vampires who kidnap Prof. Baxter thinking he is one of their own killing his own kind and an ancient American Indian monster, Big Owl who seeks revenge against Prof. Baxter. Of course, there is also the unrequited love story as Ernie Baxter loves Mindy from afar. Being the typical shy professor he is too afraid to ask her out or tell of his feelings. We can see Mindy is eager for him to ask her out but since he doesn't, she has plenty of others who do and she is a flapper who loves to have a good time.

I loved the book! A fun bunch of stories quickly rolling together with repeat appearances of characters throughout the book. I'm not sure whether I'd call it a graphic novel though as it's storyline is not that of an actual novel. In reality what we have hear are a collection of one page web comix that were published previously and have been combined together into this volume. Sometimes one page is a mini-scene in the life of the characters. Then a story arc with unfold over a series of pages and be resolved. With the next case starting up right after one finishes. In this regard the book lacks the cohesive elements of a novel and instead is a collection of fast paced mini stories about the same characters that are kept together by the reappearance of characters, both good and bad guys, in future cases. There is a recurring theme of Mindy's relationships and Ernest and Mindy's "love" story which progresses very slowly.

So while I would call this a collection of comics, rather than a graphic novel, I really enjoyed the 1920's noir style detective stories. The characters were all a lot of fun and the bad guys, though of a supernatural variety, reminded me of the old Dick Tracy movies; I've never read the comics. In fact the whole book has a Dick Tracy atmosphere and Ernie and Mindy reminded me of an American Tommy & Tuppence. Certainly a lot of fun for the noir detective reader, if you don't mind crossing paths with werewolves, gargoyles and the like. The book ends right in the middle of the action, just as an epic fight is about to start, so there obviously is meant to be a book 2 but seeing as Zuda publishers has gone under, it's future is uncertain. But since Zuda was an imprint of DC Comics they certainly have the ability to continue publishing the series if they see fit, through another imprint.

While the book is most likely written for adults. I'd say it is a crossover that will be enjoyed by all ages down to around ten years old. There is a small bit of suggestiveness of the slight cleavage and garters variety but otherwise nothing of concern for age appropriateness. A good, fun read for middle graders, teens and adults!
Labels: children's books graphic novel mystery paranormal YA