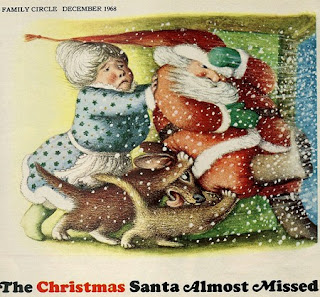 Last Sentence:  "If it does, it will be absolutely, utterly, unbelievably...Fantastic!"

Garth Williams, of course, was a famed children's writer and illustrator.  Most known for the books he illustrated such as Laura Ingalls Wilder's Little House books, George Seldon's Cricket in Time's Square and the original Charlotte's Web & Stuart Little.  This story appears to not have been reprinted in any other format.  I can find the same title used by different authors but see no mention of this story otherwise as I find it here.  This is quite the little find indeed if this is the only version of this story ever published.

If this story has not been republished, it really is not hard to see why as it is a strange little story, rather typical of the late '60s.  There is such a terrible storm this Christmas Eve that Santa and the Reindeer cannot see where they are going and end up getting lost.  Suddenly the snow clears and they find themselves in outer space, they see Earth below them and as they are trying to decide what to do they enter the atmosphere of another planet.  Here they are met by the inhabitants, personified animals and strange plants.  If you want anything on this planet you just have to think it or wish it and if you become unhappy you just take some 2-4-6 and you feel wonderful indeed. Santa has some rather psychedelic experiences and is then introduced to Boy, the only child on the planet.  It seems only one is allowed on this planet as it was discovered years ago that children are little beasts who have to be bribed with presents to be good.  So they got rid of all of them except for Boy.  Anyway, Santa gives them presents and they find out they like them and in return they give Santa a pouch of the magic powder 2-4-6 which will help children to be good and sensible and seek out the truth, which Santa plans on sprinkling a very small pinch in each stocking once a year.

When you think about it this is very much a "Lucy in the Sky with Diamonds" type of story which on one hand can be innocent enough but on the other can easily symbolize the drug culture of the times.  It is odd and strange but quite whimsical as well.  The illustrations are fantastic.  Oh and by the way, that is the name of this planet, Fantastic. Altogether there are a total of 10 illustrations including an entire full-page one. Quite a little treat to read and add to my collection!
Labels: 1968 children Christmas short stories