325: The Bridge by Jane Higgins 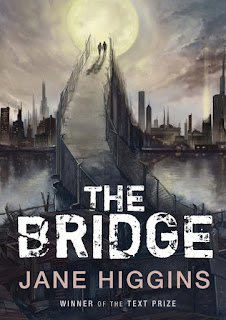 Publisher's Summary: "The City is divided. The bridges gated. In Southside, the hostiles live in squalor and desperation, waiting for a chance to overrun the residents of Cityside.

Nik is still in high school but is destined for a great career with the Internal Security and Intelligence Services, the brains behind the war. But when ISIS comes recruiting, everyone is shocked when he isn't chosen. There must be an explanation, but no one will talk about it. Then the school is bombed and the hostiles take the bridges. Buildings are burning, kids are dead, and the hostiles have kidnapped Sol. Now ISIS is hunting for Nik.

But Nik is on the run, with Sol's sister Fyffe and ISIS hot on their trail. They cross the bridge in search of Sol, and Nik finds answers to questions he had never dared to ask.

The Bridge is a gritty adventure set in a future world where fear of outsiders pervades everything. A heart-stopping novel about friendship, identity, and courage from an exciting new voice in young-adult fiction."

Reason for Reading: I love post-apocalyptic novels and this sounded good and also like it would be a stand-alone as I'm tired of trilogies.

I really enjoyed this book.  I'll start by saying it's not the greatest ever of this genre but something unique in what is coming out for YA these days.  This is not dystopian but pure post apocalyptic.  This world is far into the future after it's collapse and we don't really know what happened other than war of some sort.  The author is from New Zealand and we get the feeling that this is an island country, possibly NZ itself or Australia or even an alternate or unknown world.  Our Earthly history is not aligned with the current situation.  So here we are then.  Two sides fighting against each other.  The main characters are young teens trained to be fighters by their side, on their side of the river, but something goes wrong and when Nik and Fyf find themselves on the enemy's side things are not as they have been lead to believe.  The war is almost a character itself here and is more developed than any of the other characters aside from Nik.  Nik is the hero and we watch the turmoil in his mind as he sees everything he's been taught wiped out and replaced with falsehoods that are now his realities.  How he comes to terms with this as well as with his identity is part of the plot.  Being an abandoned orphan to the son of a very important living man is not something one can adjust to overnight.  Nik is a real character with a moral high road, who weighs his actions against their ethics and makes the right choices, not the easy ones.  Many sides of war are shown from both sides, from one extreme to another, how easy it is for the radicals to make moves while the moderates can be stonewalled into silence just as easily.

If your goal is to have just enough medicine and food for all you will never have peace.  People will always want more than "just enough".  If your goal is to quash the other side down enough that they will accept their lot and just be happy with what you've given them and leave you alone, you will not have peace.  People will always rise against oppression and want total freedom.  An intriguing read!  The ending is left as being rather open.  A sequel could arise easily from this.  However, the ending also suits to letting the reader imagine what would happen next and I hope the author leaves the story as is.  Trilogies are becoming so blase in YA fiction these days.
Labels: 2012 post-apocalypse science fiction YA