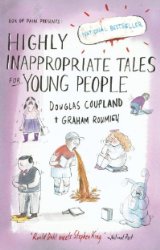 
First sentence: "Donald was a juice box with a terrible attitude."

The answer is seven deliciously wicked tales featuring seven highly improbable, not only inappropriate, characters, including Donald the Incredibly Hostile Juice Box, Hans the Weird Exchange Student, Brandon the Action Figure with Issues and Kevin the Hobo Minivan with Extremely Low Morals. If you are over the age of consent, seriously weird or just like to laugh, you'll love the unlovable miscreants who unleash their dark and unruly desires on every page of these unsuitable, completely hilarious tales."

Reason for Reading:  I have not read this popular Canadian author, but the book intrigued me as I do like quirky, snide humour.

I'll start off with some caveats.  This book is *not* for children, nor really *for* young people if one is thinking young means teenager.  The word young here would apply to the opposite of old.  I think the book would have been more appropriately named "Highly Inappropriate Tales *About* Young People".  The publisher's summary contains this phrase " If you are over the age of consent," and if I was to recommend this book to a certain group of readers I would say those most likely to really enjoy these stories would be adults who don't really like children very much.

The stories presented here are dark, and there is no denying they are humorous but they are likely to offend just as much as they are to make one snicker.  Some stories are about personified inanimate objects such as a juice box, a mini van, a fashion doll and an action figure while the others are about children (elementary to young teens, about 13).  Children are murdered, tortured, harmed and caused discomfort.  All of this is in the realm of snide humour.  These are not fables, they have no morals.  They don't have "gotcha" endings where the bad guy gets his in the end; no the bad guy always wins.  Most of them really did nothing for me.  I tolerated them; they certainly didn't offend me as I've read in some of the other reviews of this book.  I did smirk here and there but generally the endings just fell flat with me.  The one I did enjoy was "Sandra, The Truly Dreadful Babysitter".  Upon arriving at her first job, the illustration shows her arriving via Mary Poppins descending from the air via an umbrella with a satchel in her other hand.  She "asked the twins what they wanted to do.  They said they wanted to play video games and text their friends, and Sandra said, Those are stupid and boring ideas.  Let's all go shoplifting."  This is the type of humour you can expect.

I did enjoy the illustration more than the text.  They are quirky, creepy and add an extra element to the tales not always spelled out in the story.  I think this book of stories is going to appeal to a certain audience but will offend a larger audience who buys it not realizing exactly what these stories have to offer.  Certainly imaginative writing, but "caveat emptor".