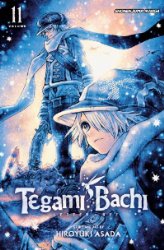 Publisher's Summary:  "Largo Lloyd, ousted director of the Beehive, saves the life of a Marauder—and, in return, demands to be taken to the leader of Reverse. Will the Letter Bees finally penetrate to the heart of the rebel organization? Meanwhile, with his hero Gauche returning home at last, things are looking up for Lag…until he discovers the shocking truth about Gauche!"

This is a very readable series and while I need the "story so far" blurbs each book begins with, it hardly takes me any time to get back into the flow of the story.  This is an action-packed volume in which most of our huge cast of characters make an appearance, however brief.  Not something that happens often at all.  The story's main focus is on whether Gauche is really back to himself or is Noir in disguise.  But we also have cut scenes to all the other characters working on fighting against/finding Reverse.  There is an exciting major battle scene in which many of our hero characters congregate together to battle the main monster and we finally meet Moc's Dingo; very unusual from all the others!  I'm getting anxious at this point for the truth to be revealed to our heroes.  We the reader know more than they do, which is becoming frustrating, but we don't know the whole truth either.  If the heroes knew at least as much as the reader we could at least sort out which groups are truly the good and bad guys because as it stands now there are a lot of grey areas and at volume 11 this is feeling like it's time to move on in plot for me.  Frustrating but in a good way, if ykwim!